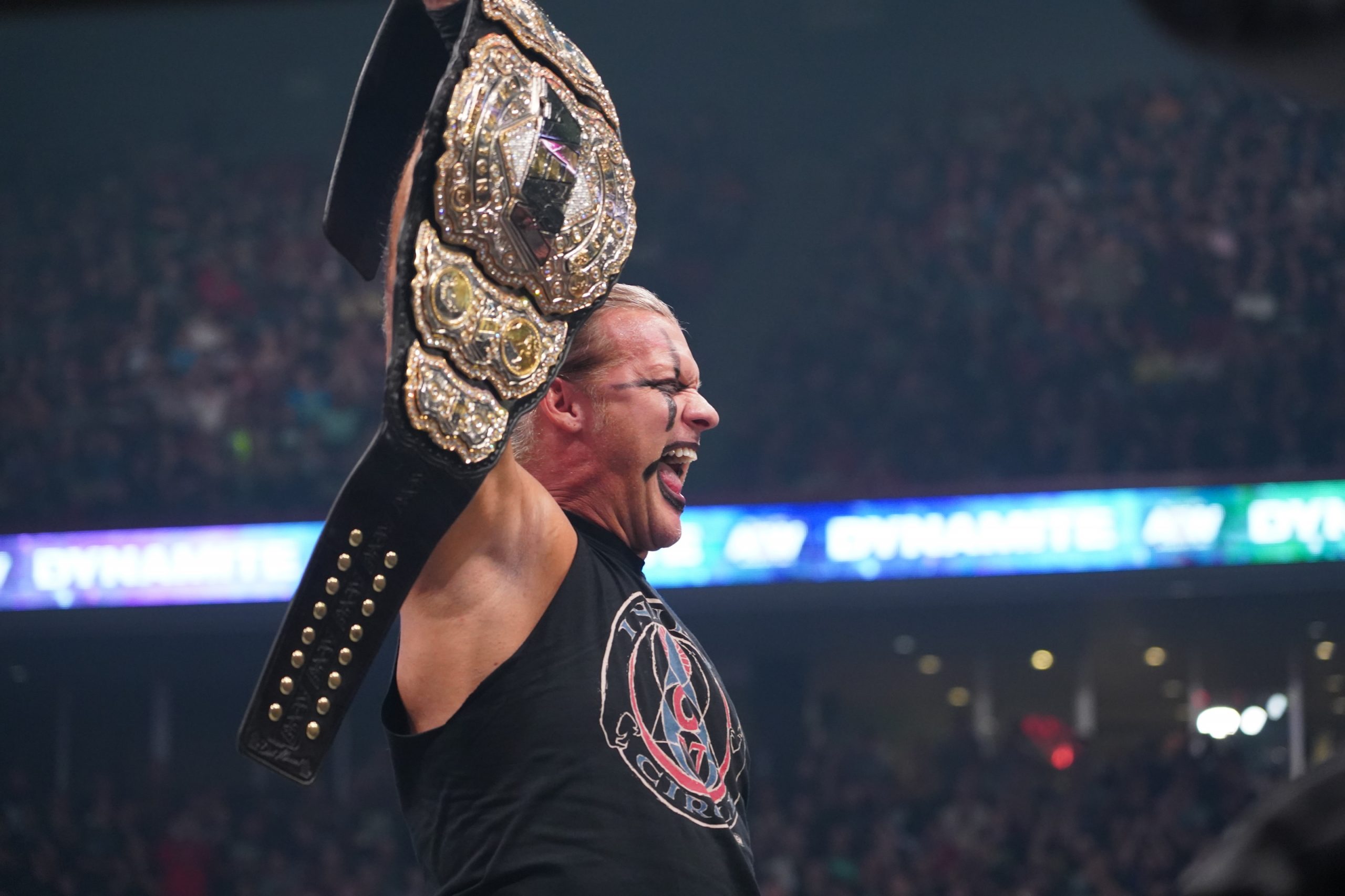 Many wrestling fans react negatively to older wrestlers in high-profile positions, or at least they do after their initial nostalgia pop. There’s often a feeling that a younger, more active wrestler should be in the veteran’s position and that the older wrestler can’t perform as well as they used to. In WWE, these feelings are compounded with frustrations about the company not building up new stars, at least on the main roster, and sometimes about the company running shows sponsored by the government of Saudi Arabia – see the recent variety of reactions to Brock Lesnar and Goldberg’s wins at Super Showdown.

At the same time, though, there are plenty of working wrestlers who may be past their physical primes, but still have good matches and play entertaining characters. This article is about appreciating the subset of those performers I’ll call ‘Old Man Wrestlers’ – active male wrestlers aged forty-five or older. (If you’re forty-six and reading this, of course you’re not “old,” but you know if you were an athlete you’d be considered over the hill.)

A good ‘Old Man Wrestler’ probably isn’t as athletic as he used to be, but he makes up for that with creativity, personality, the kind of in-ring skills gained only through years of experience, and often the ability to bring out the best in younger talent. Wrestling would be worse off without these ten ‘Old Man Wrestlers’ around.

The first spot on this list goes to maybe the most obvious pick: Chris Jericho. He was already known for reinventing himself with different versions of his persona when he signed with All Elite Wrestling, and then he somehow pulled it off again.

While the match in which he beat Hangman Page to become the first AEW World Champion was far from universally beloved, its aftermath provided some of the most entertaining non-wrestling shenanigans in wrestling in a while when Jericho went on an improv rampage backstage that gave AEW a huge hit catchphrase with “a little bit of the bubbly” and then promptly lost the championship belt at a Longhorn Steakhouse in real life.

Once AEW Dynamite began, Jericho consistently provided more entertainment as champ and leader of the Inner Circle, with top notch promos, segments, and that parody video that correctly identified him as the youngest AEW Champion in history at age 49. His last feud as the first champ with Jon Moxley was arguably even hotter than his previous one with Cody, and he flew to Tokyo in the middle of it to have a legend vs legend match with Hiroshi Tanahashi. While his Lionsaults may not look as effortless anymore, Jericho clearly hasn’t lost a step when it comes to everything else it takes to be a great professional wrestler.

Gorgeous Matsuno, a comedy wrestler who works mainly in DDT, is 58 and looks like he’s going on 75. He likes singing lounge songs that everyone hates and telling stories about his hard life that nobody wants to hear. These traits combined with a voluminous head of hair and 0% body fat make Matsuno a visually unique and hilarious presence in any match, and someone who takes being an old man wrestler to its funniest extent.

Masaaki Mochizuki is, along with arguably Dragon Gate’s number one hot dad, one of those experienced wrestlers who’s fully embraced his veteran status, and always looks better for it. His combination of shoot karate skills, effortless charisma, and ability to have a good match with basically anyway makes him a valuable and unique performer.

The Old Man Wrestler era of Mochizuki has found success mentoring up-and-coming talent (in the Mochizuki Dojo faction) (RIP) and had acclaimed singles matches against younger but already well-established wrestlers. (See: his match with Kenoh in last year’s N-1 Victory tournament and his challenges for the Open the Dream Gate Championship against Shingo Takagi in 2015 and Yamato in 2017.) His latest cool accomplishment is becoming a GHC Tag Team Champion as half of an all-star duo with Naomichi Marufuji and I wouldn’t put it past him to still be doing cool things when he’s sixty.

Rey Mysterio turned 45 last December, so according to the qualifications for this list he’s an old man wrestler and we all just have to cope with that. But given how he’s embraced his veteran status since he returned to WWE in 2018, I think he might not mind the classification. His best work in recent years has been putting over younger talent – in WWE, especially luchadors new to the main roster. His feud with Andrade produced some top-notch TV matches and his current angle with Humberto Carrillo and Angel Garza is making everyone involved look good. Shout out to stem cells for enabling this era of Rey Mysterio wrestling as a living legend.

LA Park owns every second of being an old, fat, brawling, chair-wielding skeleton man, which makes sense because that’s one of the best things a human could be. LA Park, best known to many wrestling fans outside of Mexico for his time in WCW as La Parka, has remained a major player in the lucha libre world in his fifties. His feud with Rush that started in CMLL a few years ago produced exciting matches and was a huge hit with fans, even leading MLW to try to run a Rush vs. Park match in the U.S (unsuccessfully).  Both wrestlers are currently in AAA and in an alliance so tenuous their feud seems sure to restart in 2020. If they finally have the hair vs. mask match that’s been teased for years, the crowd will probably be crazier than the most recent story about Park from a U.S. indie promoter.

Dusty’s oldest son brought his Goldust aesthetic and his Dustin Rhodes history with him to All Elite Wrestling and combined them to make one of the promotion’s best characters. He mixes his southern wrestling background and rock-solid, old-school in-ring skills with an open-mindedness about what the kids are getting up to these days. (See: his charming, short-lived tag team with Sonny Kiss and that time he did a Canadian Destroyer.) (Do not see: that time he forcibly kissed Jake Hager’s wife.) In addition to being an active member of the promotion’s wrestling roster, Dustin is part of AEW’s coaching stuff as a “promo coach” and “match producer,” and he seems like one of the best possible wrestlers for the job.

A big part of why Sanshiro Takagi’s twenty-five year wrestling career is so impressive is the part of it that takes place outside of the ring. Takagi founded DDT in 1997, remained president of the company after selling it to Japanese media company CyberAgent in 2017, was a key player in CyberAgent buying the financially-struggling Pro Wrestling NOAH earlier this year, and is now also the president of NOAH.

With all this going on, Takagi’s still always a welcome in-ring presence in DDT. His 100 Plastic Cases Match against Isami Kodaka, in which the wrestlers had to fight in a ring filled with generic plastic storage containers, was one of the most anxiety-inducing bouts of 2019. Takagi’s comic timing hasn’t gone off-beat with age, and some of his funniest and best recent work has been with twenty-three-year-old Mao, who mocks the company founder for his age, but clearly carries the same weird spirit that makes DDT what it is. Plus, Takagi and the previously-mentioned Gorgeous Matsuno made themselves very easy to remember when considering entries for this list by being the only two people so far to have held the DDT O-40 Championship, a title for DDT wrestlers over the age of 40.

Though he’s pushing fifty, Takashi Sugiura still has cool things going on in his career. The four-time GHC Heavyweight Champion turned an intended insult about his long NOAH tenure into the perfect nickname, The Company Dog. His current persona is a balancing act between the square-jawed, cigar-chomping Killing Machine and the proud owner of an adorable shiba inu.

In addition to still being a strong singles match wrestler, Sugiura’s the leader of probably the hardest stable in wrestling, Sugiura-gun (Sugiura army), which includes catch wrestler Hideki Suzuki, MMA legend Kazushi Sakuraba, Dick Togo, and veteran shoot fighter Kazuyuki Fujita. On top of all this Suguira will represent NOAH in All Japan’s 2020 Champion Carnival. At an age when many wrestlers have retired, he’s still a cool character, exciting addition to any match, and quality sources of cute dog pictures on Twitter; truly one of the wrestling world’s most aspirational figures.

When I first heard of Tim Storm, he was being used as a punchline for the state of the NWA. The fifty-plus-year-old science teacher was the promotion’s world champion when Vice ran an article with a headline that asked the question on every wrestling nerd’s mind, “The NWA Is Worthless, So Why Did Billy Corgan Just Buy It?”

But in a time when most people who weren’t Smashing Pumpkins vocalists saw the ten pounds of gold as worth less than a ten-pound dumbbell, Tim Storm believed it meant something. He valued being NWA Champion to a degree that seemed delusional, but in a way that was less “old man yells at cloud” and more a Don Quixote for the territory days. Storm as the face of the NWA revival represented the most positive version of what the NWA revival was about, and though he’s no longer the champ, these qualities still make him one of NWA Powerrr’s best characters.

At 51, Minoru Suzuki kicked off 2020 with one of the year’s most hyped matches against Jon Moxley, and that probably won’t be his only widely talked about match this year.

Suzuki’s combination of a wrestling style informed by shoot grappling skills with top notch character work is something he’s been able to use consistently through a decades-long career, and he experienced a new wave of popularity in middle age when he caught on with New Japan Pro Wrestling’s growing international audience. This year, his bookings outside of Japan include two very different WrestleMania weekend singles matches that sum up his range as a performer: one against Chris Dickinson at Bloodsport and one against Orange Cassidy at Joey Janela’s Spring Break 4. Minoru Suzuki isn’t as much of a big match guy as he was a couple of years ago, but he’s still one of the most entertaining ‘Old Man Wrestlers’ out there.