Being forced to retire sucks. Being forced to retire whilst being one of the hottest stars in joshi wrestling is beyond f*cked up. But the year is 2020, and we aren’t allowed to have nice things, so the reality is that Arisa Hoshiki was unfortunately forced to retire back on May 20th. Having suffered from head and neck injuries throughout her 2nd run in the company, Arisa’s last match was in a largely insignificant 8-woman tag team match back in February – the same day Stardom rookie, Leo Onozaki, had her retirement match & ceremony due to recurring back injuries.

Arisa’s retirement came at what could be considered the peak of her Wonder of Stardom Championship run. She held the belt for well over 300 days, successfully defending it 10 times. Furthermore, Arisa’s retirement came at the end of a 16-month return to the ring after a hiatus dating back to 2012. Over these 16 months, Arisa ascended to the top of the joshi world, going from merely a first-generation wrestler making a comeback to being regarded as one of Stardom’s best performers in its 9-year history. So today, let’s look back at the qualities and performances that truly sent the Shining Star into the stratosphere.

While she is best known for her more recent run with the company, followers of Stardom will likely know that Arisa was originally a member of the first generation class back in 2011. Even from the start of her career, Arisa was one of the standouts in the fledgling company. She made it to the finals of the first Rookie of the Year Tournament held by Stardom with even Mayu Iwatani recently admitting her jealousy of how natural a pro wrestler Arisa always was. After a 17 month run in the company, Arisa took an indefinite leave of absence from wrestling in May 2012 to focus on school as well as pursuing other ventures, most notably shoot kickboxing and becoming the lead singer of her own rock band.

Arisa’s band, Unlimited Dream Navigator, formed just a short while before her eventual return to the ring in 2018; Both that and her kickboxing experience undoubtedly helped form the expanded skills she would display when she returned to the squared circle. In kickboxing – a sport her dad is also a proud practitioner of – Arisa went 1-1 back in 2014, winning her first bout via TKO and losing her second in a unanimous decision. While it was far from a triumphant run in the sport, her training helped to make her style far more precise and added an asterisk to her name that cemented her as a legitimate shooter in professional wrestling. Similarly, UDN helped display Arisa’s natural charisma to an audience of people, something that she would be well known for during her star-making run.

Now, when I say Arisa had natural charisma, I am not being dramatic. From her hilarious promos and out of context twitter videos to her facial expressions and undying swagger, Arisa is one of the most charming people to compete within a wrestling ring. She was also amazing at controlling the energy of a match regardless of the circumstances. One of the most interesting instances of this was her match against Utami Hayashishita in January 2020, her 9th title defense of the white belt and one of my favorite matches of the year. While Arisa was the obvious babyface going into the match, Utami drew blood early into the match, completely changing the dynamic that was assumed from the start. In what seemed like an instant, Arisa transformed into a sadistic heel with the smile on her face changing from a sign of her typical goodness to a symbol of her newfound schadenfreude. This was not the first appearance of the “smiling psychopath” in a white belt defense, but it was undoubtedly the most notable and the most captivating from her year-long reign.

On top of all the strengths I’ve mentioned, Arisa was also one of the best bell-to-bell wrestlers in the company during her time at the top. Despite a slow start from late 2018 to early 2019, Arisa had spectacular singles matches throughout 2019 against the likes of Konami, Jungle Kyona, Momo Watanabe, and Hazuki just to name a few. This also brings forth the fact that Arisa had chemistry with so many members of the roster that it became an expectation for each white belt defense to be a MOTYC. Similar to my assessment of Kagetsu, Arisa was one of the best “big match wrestlers” in the company especially with wrestlers she had a strong connection with inside the ring – like Tam Nakano.

It was likely a bit of a shock to some of you that I left Tam out of that list as Arisa vs Tam for the Wonder of Stardom Title was widely considered the Match of the Year for 2019 by Stardom fans. With that being said, Tam and Arisa’s relationship arc since 2018 was far more than just that one good match. From the moment that Tam rejected Arisa’s plea to join STARS, the duo became one of the most interesting long term stories in recent Stardom history. Months of bickering and passive-aggressiveness culminated in a championship encounter that blew the roof off of Korakeun Hall as two stablemates learned to understand one another by beating the breaks off of each other. This understanding led to the second phase of their relationship; Despite still being something less than friends, Tam and Arisa would become one of the strongest tag teams in the company, winning the Goddesses of Stardom Tag League and turning everything they touched into pure gold.

While it’s been fun to take a short look back how great Arisa’s 16-month return was, I’d be amiss not to mention what will be missed in her absence. On the first-ever Stardom show in January 2011, Arisa Hoshiki battled her eventual tag team partner Mayu Iwatani in one of only two singles meetings for the pair. With that being said, the prospect of AMA battling it out at the Stardom 10th Anniversary Show would have been one of the biggest money matches in Stardom history. In the words of Rossy Ogawa himself, Stardom’s history IS Mayu’s history, and that singles match for both the white and red belts would’ve been the perfect way to close out the first decade of Stardom.

Arisa Hoshiki is one of the latest on a long line of retirements that have plagued the joshi world over the past year. Though I’m upset that we won’t get to see Arisa kick any more heads off, it is nice to think of just how big of an impact she had on Stardom throughout her short return to the ring. Even stuff I didn’t touch on here like her feuds with Konami, Hazuki, or her short yet interesting storyline with Kagetsu – they were some of the highlights of professional wrestling in 2019. As for now, I highly recommend you check out Unlimited Dream Navigator and their music because even though she retired from in-ring competition, the light that radiates off of the Shining Star will never truly go out. 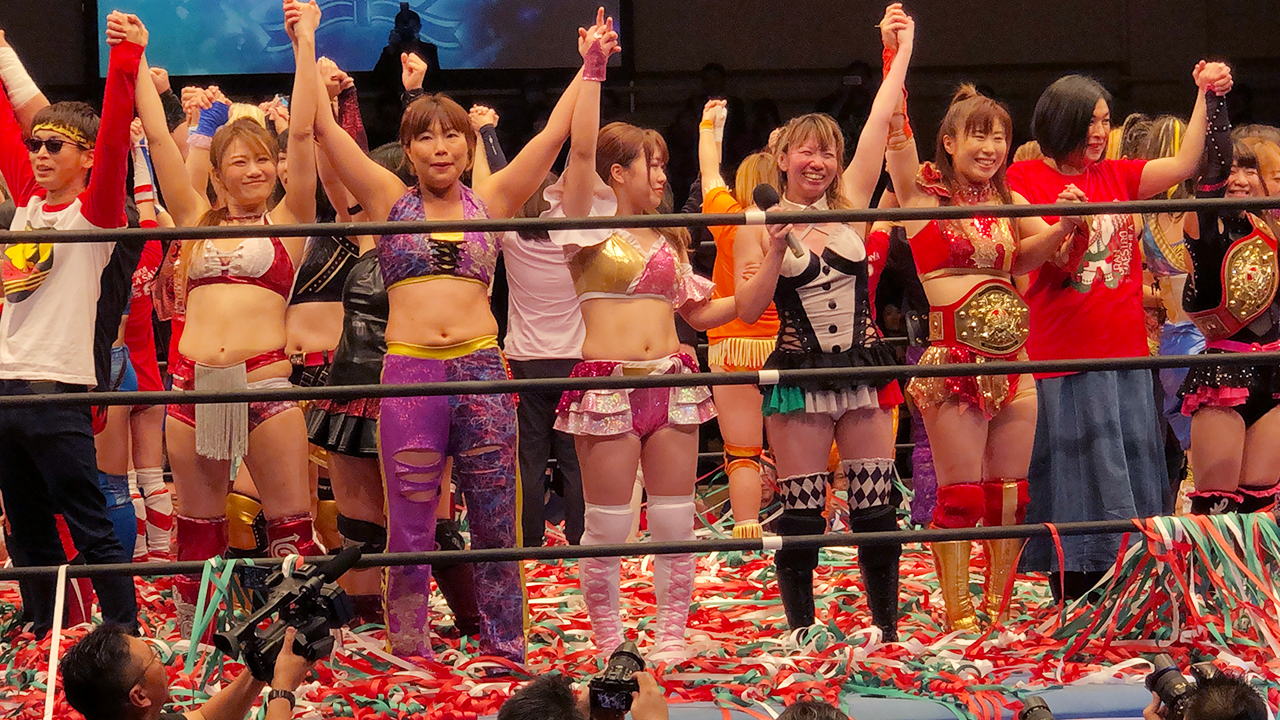