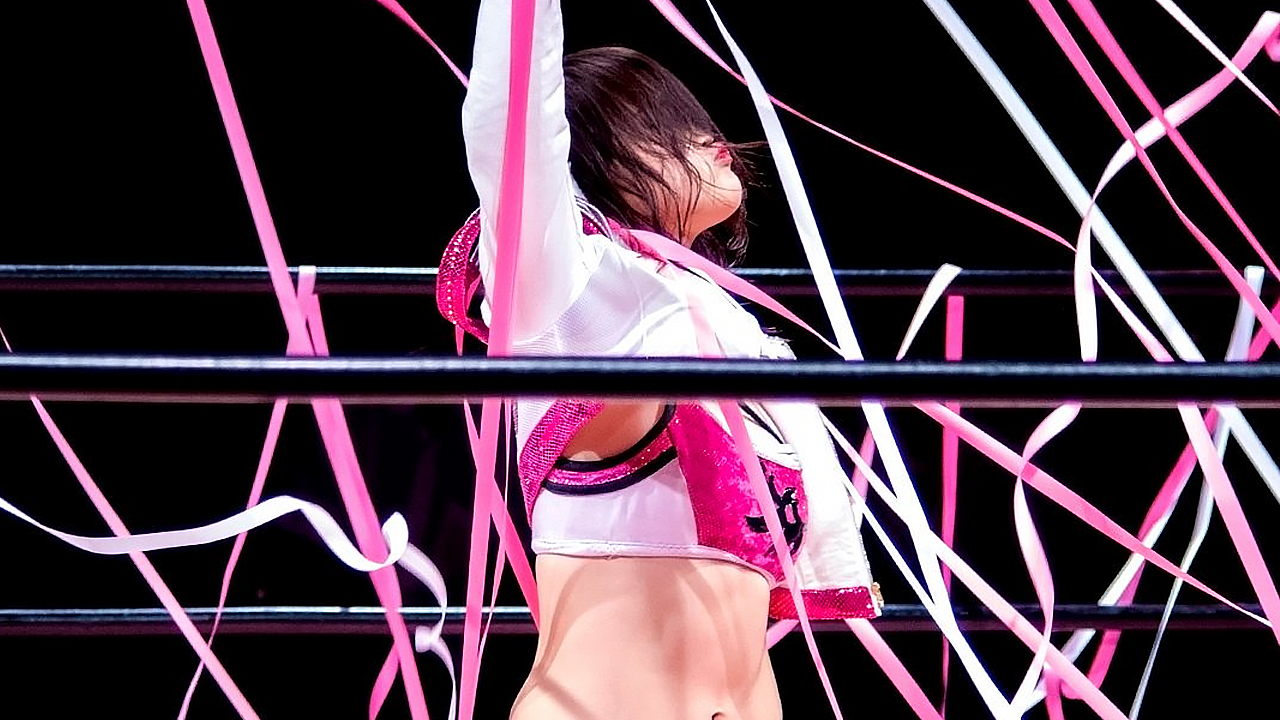 Early in the young promotion’s life, All Elite Wrestling revealed that it had friends in the wrestling world. AEW has partners in Lucha Libre AAA, the largest wrestling company in Mexico; Chinese promotion Oriental Wrestling Entertainment (OWE); and Japanese main-stay Dramatic Dream Team (DDT). Wrestling fans have seen the relationships between these companies in action through AEW wrestlers appearing on their allies’ shows and vice versa.

In AEW, fans have already seen a feud over the AAA World Tag Team Championships between the Young Bucks & the Lucha Brothers, appearances from AAA wrestlers Laredo Kid & Faby Apache, OWE’s CIMA & T-Hawk, and Shoko Nakajima & Yuka Sakazaki from Tokyo Joshi Pro, DDT’s all-women subsidiary, to name a few instances of the inter-promotional cooperation. There are still so many regular members of the All Elite Wrestling roster who people have barely gotten to know yet, but when AEW does want to introduce new characters, it has plenty of options it could recruit from within the rosters of its international pals. For when that time arrives, here are, in no particular order, eight wrestlers from All Elite Wrestling’s partner promotions who could be great fits on AEW Dynamite.

Tokyo Joshi Pro’s Miyu Yamashita could easily be the next international star to make an appearance for AEW. Kenny Omega faced off against Miyu Yamashita at DDT Ultimate Party 2019 & said in an interview afterwards that he was interested in bringing her over at some point. The TJPW ace has already represented the company abroad in Chikara, Frontline, WWN, and the DDT show in New York this past Wrestlemania weekend, and it’s not hard to see why. Yamashita’s stoic persona helps her stand out in the often comedic TJPW and, in general, makes her look like a badass and her matches feel important. In the ring, her biggest strengths are probably her hard kicks and selling ability. Overall, Yamashita is really talented and fun to watch and would be a great addition to the AEW women’s roster, or really any roster anywhere.

There are two old man wrestlers who have already done quality late-career work in AEW: Dustin fka Rhodes and Chris Jericho. Jericho especially has been a star in the new company with his hit-rock-bottom middle-aged divorced dad energy, his love of the bubbly, his band, his Inner Circle of young dirtbag friends, and his loss of the world title at a Longhorn Steakhouse. There is only one man can meet Le Champion on his very specific level and that’s AAA’s Dr. Wagner Jr.

Dr. Wagner Jr. has been wrestling since 1986 and has racked up accomplishments in CMLL, AAA, New Japan Pro Wrestling, and elsewhere. Somehow, the 54-year-old can still go! His strong character work and willingness to brawl and generally go hard were important contributions to the hate-filled Wagner vs. Blue Demon Jr. feud that resulted in the bloody, insane mask vs. hair main event of Triplemania XXVII.

Wagner also has extremely divorced dad energy, especially since he lost his mask at 2017’s Triplemanía. His unmasking revealed him to be absurdly hot, a full-on silver fox at age 52. Like Chris Jericho going to NJPW later the same year, Dr. Wagner Jr. losing his mask started a new era in his career at an age when many wrestlers have already retired. A Wagner vs. Jericho clash of the sleazy, charismatic, somehow not yet washed up titans is something that the world needs to see, and it’s something AEW should absolutely host as soon as possible.

Daga would bring about ten years of experience (he currently works in AAA, making appearances for Impact Wrestling and Dragon Gate and various indies) to AEW as well as some stylistic variety. His strong style-influenced skills would be a change of pace from the company’s mix of mostly high fliers with some hardcore wrestlers. Daga’s history working with more acrobatic wrestlers in the lucha libre world would also help make him a valuable addition to AEW.

Speaking of high-fliers, AAA’s El Hijo del Vikingo might be the best of those in the world right now. The only reason people aren’t talking about this constantly is because he only works in Mexico, with very little stateside exposure other than a brief appearance on Impact Wrestling. He’s freakishly good at everything acrobatic, makes it all look easy, and looks cooler doing it than almost anyone else. Stick Hijo del Vikingo with or against anyone who can go fast and flippy in AEW and he’ll quickly become a huge star to a new audience.

Mao is a 22-year-old former backyard wrestler who just temporarily left DDT for an excursion to the UK, and AEW should absolutely get him on Dynamite sometime after he gets back. Mao is always down for the weirdest matches possible; his last before leaving was a Nagano Style Scramble Bunkhouse, Lucha Glasses, 2 Count Fall, No DQ, No Rope Escape, TLC, Halloween Six Man Tornado Tag Team Elimination match (…yeah).

Mao also has a compelling weirdness about him that can’t be taught, but can be summarized through his slogan, “fucked up wrestling for a fucked up world.” It’s this quality that makes me certain the world needs to see Mao and Darby Allin unleashed upon each other, or Mao and Orange Cassidy, or Mao and a disdainful MJF. The possibilities are endless for someone like Mao in a company that’s willing to get weird, which AEW has already shown it is.

Tokyo Joshi Pro’s Maki Itoh is, to some, one of the most relatable wrestlers in the world. She’s a failed idol (in kayfabe – in real life she’s currently part of the idol group Tokiwoikiru) who became a pro wrestler and at first was really not good at it (in kayfabe and real life.) Her in-ring work has gotten way better since she debuted, but Itoh has largely won fans over with her persona, that of a love-able loser in the least noble sense, someone with almost no filter stopping her from reacting to hardship in socially unacceptable ways.

Itoh deals with adversity by screaming and crying and flipping people off. She throws headbutts fueled by violent rage and the notably large size of her head, and she’s in debt due to a face lift that didn’t work. In the same matches, she insists the audience tell her she’s the cutest in the world (and she’s definitely a contender). She doesn’t only want to win at wrestling and be recognized for her cuteness though. Ito-chan, the name the crowd answers with when she asks, “WHO IS THE CUTEST IN THE WORLD?!” is driven to be respected, and leads a faction called the NEO Itoh Respect Army (formerly the Itoh Respect Army) that has maxed out at a size of two wrestlers including her. She has a lot going on, and the combination of it all makes her not only someone people connect with, but a really entertaining character.

After a wrestling career defined by failure, Itoh recently experienced a change of fortune that could be the perfect justification for bringing her to the U.S. when she became the third-ever TJPW International Princess Champion. This title has only existed since August 2019 and has yet to be defended outside of internationally, but if it showed up on Dynamite, it could be used to strengthen the bond between AEW and the DDT Universe.

Since joining AAA in 2016, Big Mami’s star power has risen as half of a tag team and dysfunctional couple with Niño Hamburguesa, with whom she held the AAA World Mixed Tag Team Championship for over 700 days. Though she and Hamburguesa are a really entertaining tag team, Big Mami could clearly be a big deal outside the act. This isn’t just because she has experience as a singles wrestler; Her likeable personality and her willingness to go to the top rope despite being larger than most high fliers, you can’t help but root for this woman. It would be a huge missed opportunity for AEW not to at least include Big Mami in some future battle royal matches, but I wouldn’t mind seeing her stick around for a while and get a run with the AEW Women’s World Championship either.

Notably absent from this list so far have been wrestlers from OWE, and that’s because it seems like the company might be in a bad place. Whether good or bad, it’s one in which the company is not able to get visas for the Chinese wrestlers who make up most of its roster. However, OWE is reportedly still trying to get a visa for El Lindaman, who competed alongside Cima and T-Hawk at Double or Nothing, so he can return to AEW. So even though he’s wrestled one match for the company before, El Lindaman gets to be on this list to send good vibes to that visa process and to emphasize they should really to get him back, please!

El Lindaman is a wonderful personality to have around whether he’s using his very round face to be an adorable babyface like early in his career in Dragon Gate, or to be a little gremlin heel, as he has been most of the time for the past few years. As an athlete, his power and speed are impressive. The only physical attribute someone could point to as a possible downside is his height, a billed five foot three inches, but AEW has already established itself as a place where shorter and smaller wrestlers can be stars. Using Lindaman and T-Hawk as a tag team or having Linda feud with less-jacked tiny guy Marko Stunt and are just a few of the ways this versatile, entertaining performer could fit into the landscape of AEW Dynamite. It’s basically only a matter of time before any nation where people can watch AEW is swept up in El Lindamania.

Of course, there are many talented wrestlers aside from these eight in DDT/TJPW, AAA, and OWE, some who have already showed up in All Elite Wrestling briefly and would be welcome if they came back. But when AEW wants some fresh faces (and El Lindaman!), these wrestlers seem like they could easily be hits on TNT.