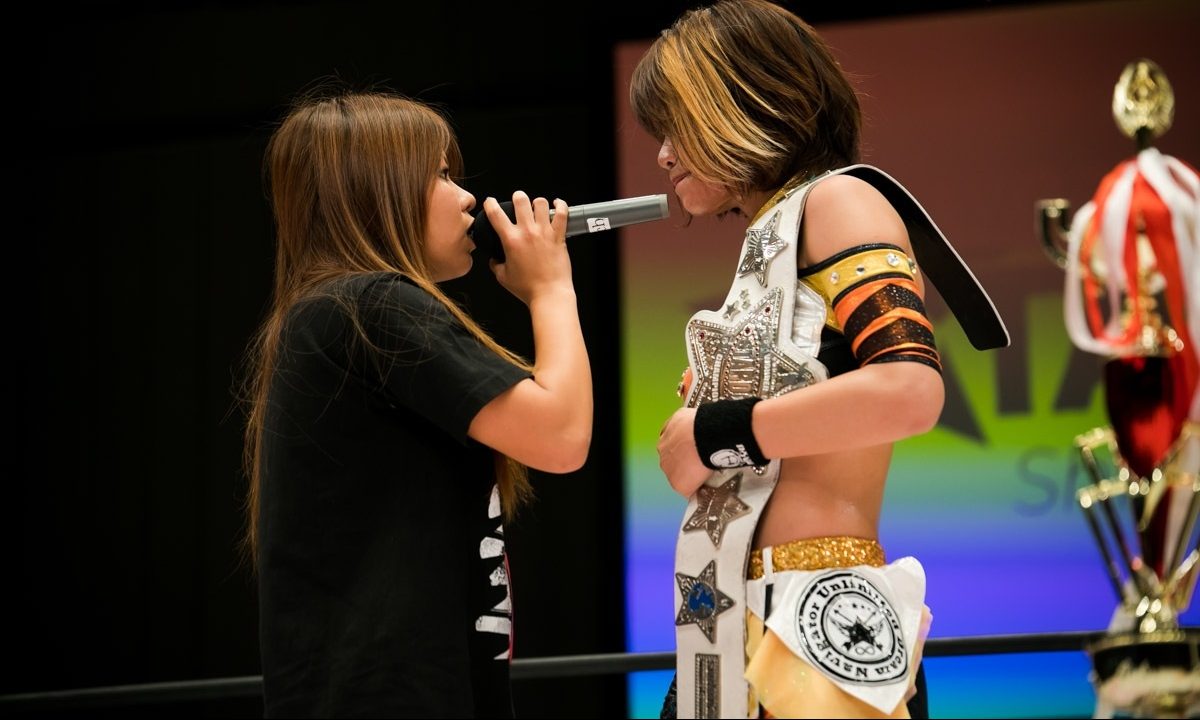 As we move forward towards the new year, many fans of Joshi Puroesu are saddened by the fact that Hazuki will no longer be competing come 2020. The 22-year-old Stardom athlete announced her retirement on November 24th, with her final match taking place at the Stardom Year-End Climax show on December 24th. Considering her relative popularity, young age, and what to many seemed to be a promising future, Hazuki’s announcement has brought some people (and by some people I mean me) to tears over the past few weeks.

Hazuki’s drive to be the Wonder of Stardom Champion has been well documented over the years, even being slated at the beginning of 2019 as her primary goal for the future. In the past four years, Hazuki has challenged four different White Belt Champions in four unsuccessful attempts at obtaining the gold. Furthermore, each title match that Hazuki had was unique from one another due to Hazuki’s miraculous growth between each of the matches she had. As her time in the wrestling business comes to an end, let’s look back at Hazuki and her neverending quest for the Wonder of Stardom Championship.

Hazuki first set her sights on the Wonder of Stardom Championship in December 2016 when she challenged Kairi Hojo for the title. At this point in time, Hazuki had just reemerged from a year-long hiatus as a member of Io Shirai’s Queen’s Quest. Being what could best be described as a hotshot rookie, Hazuki (or HZK at the time) consistently insulted Kairi, who was now over 6 months into her reign as the White Belt Champion. Now while you likely couldn’t tell it by her demeanor and presentation, the pressure was on for the young QQ member. Her first shot at the title was not only her first time competing in a main event singles match, but was her first singles match at all in well over a year. Despite the contents of the match never making tape, it is known that HZK put up a hell of a fight against the reigning champion in what was her longest Wonder of Stardom Championship match clocking in at 17 minutes and 40 seconds.

After challenging Kairi Hojo in December of 2016, HZK would end up taking just over 12 months to take her next stab at claiming the gold. This time around had far more at stake than her previous outing as she would challenge her Queen’s Quest superior, Io Shirai. Gaining the opportunity to challenge for the White Belt after going to a time limit draw with the champ in the 2017 5STAR Grand Prix, this title match could easily be seen as HZK looking to silently surpass Io and become the de-facto leader of QQ.

In a fashion that would become a common theme of Hazuki’s career, HZK grew leaps and bounds as a wrestler between her match with Kairi Hojo in 2016 and her contest with Io Shirai the following year. Throughout 2017, HZK was able to claim the Artists of Stardom championship four times alongside her fellow QQ members, as well as became a clear #2 behind Io Shirai after Momo Watanabe went down with a serious injury. This momentum that she gained after a year of partnership with Io Shirai made HZK slightly less of an underdog against her superior at that year’s Year-End Climax. Alas, it was still not enough for the win as HZK would end up submitting to a Texas Cloverleaf in Io’s third successful title defense.

Before heading into her third attempt at claiming the White Belt, drastic changes occurred to Stardom that would subsequently change Hazuki’s career forever. In April of 2018, Stardom held its first-ever “Faction Draft” that would see each faction leader take turns drafting wrestlers to their unit. Much to Hazuki’s surprise, Io Shirai decided to prioritize both AZM and Momo Watanabe in the early rounds, resulting in Oedo Tai poaching Hazuki from her QQ. Momo would win the Wonder of Stardom Championship from Io Shirai a month later, making the newly crowned leader of Queen’s Quest Hazuki’s arch-rival moving forward.

After months of ruthless battles in tag-team competition, Momo and Hazuki would have their first singles match in over three years for the Wonder of Stardom Championship. Taking place in July 2018, Momo had already successfully defended her belt twice up to this point, but this defense was going to be an uphill battle for the reigning champion. While it had always been considered taboo for Queen’s Quest members to interfere in singles matches, Oedo Tai did not follow those same rules; Hazuki was going to win this match by any means necessary.

Hazuki’s changed mentality proved to be a definite difference-maker in this match. Her growth as a more aggressive competitor alongside Kagetsu and the presence of Oedo Tai members at ringside made this the closest Hazuki ever got to winning the White Belt. Using the Oedo Tai sign during the climax of the match, Hazuki got a visual pinfall over the champion that was deemed null and void by Senior Referee Daichi Murayama due to her illegal actions. The match would instead continue, with Momo Watanabe defeating Hazuki minutes later, crushing Hazuki’s dreams of holding the title once more.

Hazuki has gone through many changes in her career that have always led her back to challenging for the Wonder of Stardom Championship. The belt, up to this point, had been more of a means to an end for Hazuki to reach her true goals: Making an example out of Kairi Hojo in the first high profile singles match of her career, surpassing Io Shirai as the de facto leader of QQ, and getting revenge on her former teammate, Momo Watanabe. That’s what made her final chase for the title different from her previous outings.

After winning the High-Speed Championship at the end of 2018, Hazuki constantly reiterated that she had no real desire to hold the belt. Instead, the High-Speed Title became her new means to an end – the end goal: become the Wonder of Stardom Champion. So, when newfound rival Arisa Hoshiki ended Momo Watanabe’s record-breaking reign as champion, Hazuki’s sight did not stray from the Wonder of Stardom Championship as she immediately made her intentions of challenging for the belt clear after the match. At the July Korakuen Hall show, Hazuki made what would be her final attempt at claiming the belt that had defined her career for 3 long years.

Hazuki’s last try for the belt was the climax of her career in Stardom. The 15-minute match against Arisa Hoshiki featured nearly every aspect of Hazuki’s growth as a wrestler over the years. She used the aerial offense she learned from Io Shirai in Queen’s Quest, the ruthlessness and brutality she became accustomed to within Oedo Tai, and the agility she acquired as one of the greatest High-Speed champions of all time. However, it wasn’t meant to be.

After a delightful match, Arisa Hoshiki was able to come away with the win after hitting the “Shining Impact” for the win. Before the match began, the reigning champion cryptically declared, “[Today] is the end with Hazuki… Well it’s not the end, is it? Just the beginning. Maybe this is the beginning of the end with Hazuki.” In a way, she was right. This would not only be Hazuki’s final match for the White Belt but also her final shot at any singles championship period. Shortly after her loss to Arisa, Hazuki competed in both the 5STAR Grand Prix and the Goddesses of Stardom Tag League in losing efforts before announcing that she was officially retiring from professional wrestling. Whether anybody knew it or not, that match truly was the beginning of the end of Hazuki’s story as a wrestler. A story that, in the end, only had two constants: Hazuki and the championship she never got to hold.