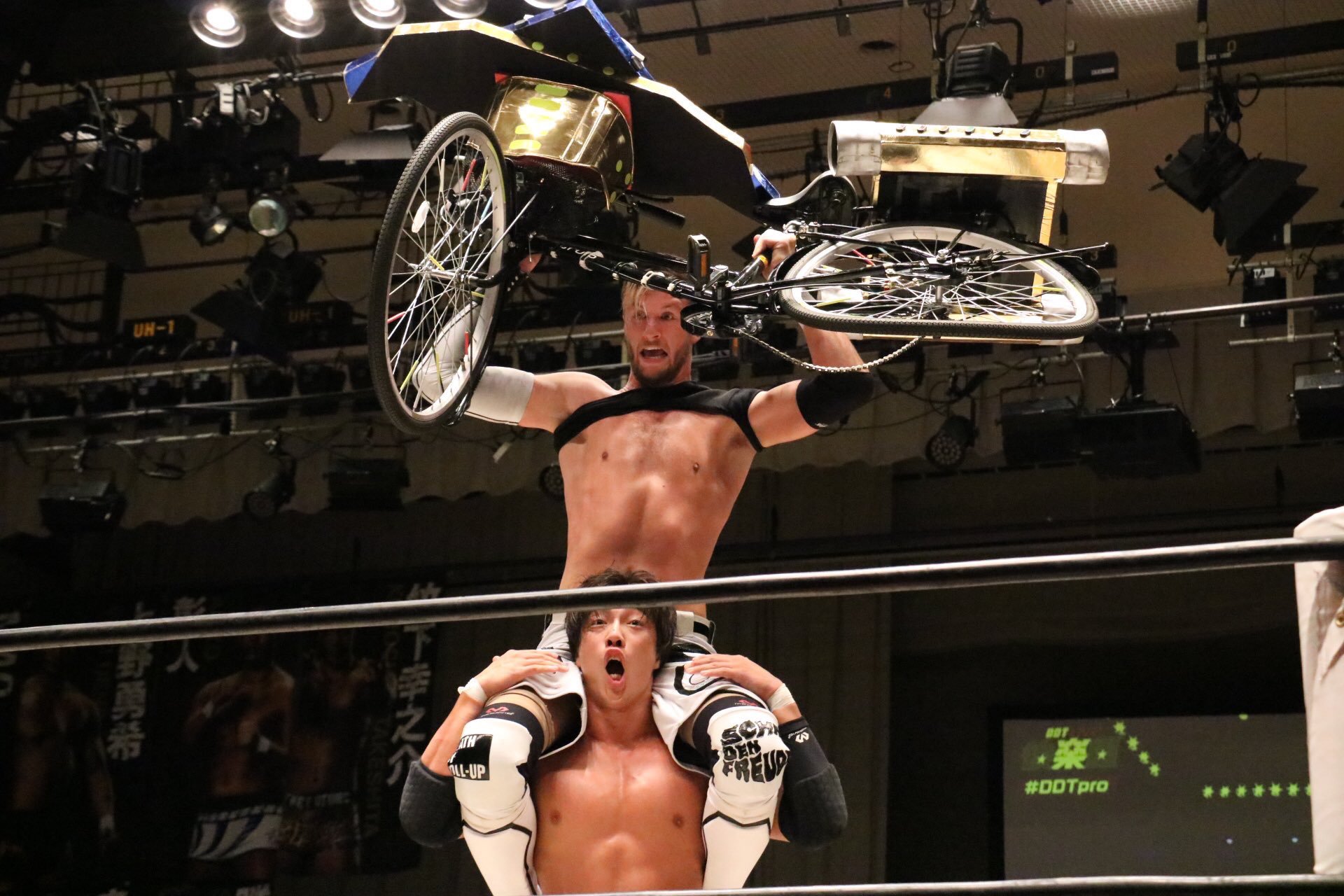 Have you ever found yourself innocently browsing your social feeds, only to stumble across clips of wrestlers locking up with blow-up dolls, shooting fireworks at each other in the woods, or even going toe-to-toe with an enormous panda? If so, you may have witnessed just a sliver of the maniacal things that go on at Dramatic Dream Team.

Founded in 1997, DDT has spent the last twenty years pushing the boundaries of what professional wrestling can be, while also delivering the same quality of story-lines and matches that you would come to expect from the best of the best in the pro wrestling world. Today it sits as one of the most popular puroresu companies in Japan, complete with a few working relationships overseas – All Elite Wrestling & Fight Club Pro – and even has its own subscription-based network established in 2017 called “DDT Universe.” So what makes DDT so great?

Current DDT President, Sanshiro Takagi, has already spent much of 2019 implementing ways to make his product more accessible to international viewers, however, there is no better resource than @ddtpro_eng on Twitter; An unofficial but authorized account that provides vital English translations of news, promos, match cards and so on.

A huge advantage DDT holds above all else is their dedication to thinking outside the box. This can come in the form of show concepts, new championship belts, and famously, their match stipulations. A great example of this would be the DDT Extreme Championship “Blindfold Watermelon Split” match between Akito and Jiro “Ikemen” Kuroshio, where after a successful one-count (yes, one-count) they earned the chance to crush a watermelon blindfolded to win the match.

Comedy and wrestling in DDT go together like strawberries and cream. DDT loves to parody other wrestling companies and real-world events. One of the most famous bits from this past year was when DDT advertised the debut of Chris Brookes, which more than borrowed from New Japan Pro Wrestling’s Jon Moxley debut teasers. The humor tends to translate just fine through the language barrier, however some wrestlers such as Antonio Honda will hop on the mic & speak Japanese which is another great reason to follow @ddtpro_eng who translates promos in real time.

A little known fact about DDT is that intergender wrestling is a common occurrence in the promotion. While Saki Akai is the only woman officially on the roster, DDT relies heavily on freelancers such as ASUKA who almost always wrestle men. One of my match recommendations from this year, Sendai Girls vs ALL OUT, was a huge statement that showcased the incredible possibilities of intergender wrestling.

Pro wrestling companies in Japan are very big on stables, groups of guys & girls that help each other achieve a common goal. DDT is no different in that regard, although they have less stables than most other companies such as New Japan Pro Wrestling or even joshi puroresu companies like World Wonder Ring Stardom.

ALL OUT: This is a tweener faction that represents the modern era of DDT. Led by the company’s current ace Konosuke Takeshita, love them or hate them, you’ll probably respect them.

DAMNATION: They are DAMNATION! They don’t conform, kiss ass, or get married. DDT’s main heels, they believe Mother Earth revolves around them and that confidence has led to great success.

DISASTER BOX: A reformation of an old heel stable also led by HARASHIMA, DISASTER BOX are now the good guys and while remaining competitive, love to enjoy themselves too.

While the championships in DDT are plentiful, don’t think that doesn’t mean that they don’t all bring something different to the table. Ranging from traditional champions like the KO-D Openweight Championship to the ever crazy DDT Ironman Heavymetalweight Championship that has to be defended 24/7 under any & all circumstances, DDT covers a lot of bases:

This may be a lot to take in, but don’t worry – DDT doesn’t force all these belts on every show, defenses (aside from the main titles) tend to be spaced out nicely and make sense.

Now it’s time! You are ready to jump into Dramatic Dream Team. First things first, head over to DDT Universe & join the subscription service. It only costs about eight US dollars a month, which is better value than most services, considering it also gives you access to Tokyo Joshi Pro Wrestling, BASARA, and Ganbare Pro – sister companies of DDT.

Most events are streamed live while some are uploaded a few days later. Personally, I’d recommend watching this year’s “Judgement” and “Wrestle Peter Pan” shows to see the bigger moments and matches that have defined DDT’s 2019. Another good show for English fans would be “DDT is Coming To America“, which took place in New York on Mania weekend earlier this year and naturally catered to English speakers. After this, you should be good to start watching live events and keeping up week-to-week.

Immediately on the schedule is “DDT Ultimate Party“, a very long card, featuring the return of AEW’s Kenny Omega, and is scheduled to take place on November 3rd. Immediately following this show is the upcoming “D-Oh Grand Prix”, a tournament similar to New Japan Pro Wrestling’s “G1 Climax”, that should allow you to find your new favorites quickly. Stories come and go fast in DDT, so don’t worry about not knowing the entire history of the company. There’s plenty of time for that!

Finally, I’d like to drop some personal match recommendations from this year that I think best showcase Dramatic Dream Team. Aside from the tag match, which has kindly been uploaded to YouTube by DDT for free viewing, everything else can be found on DDT Universe.

With the recent extended focus to make it easier to consume for international viewers paired with DDT’s creative, outside-the-box thinking, I think it’s safe to say that this is a formula for success for Dramatic Dream Team.