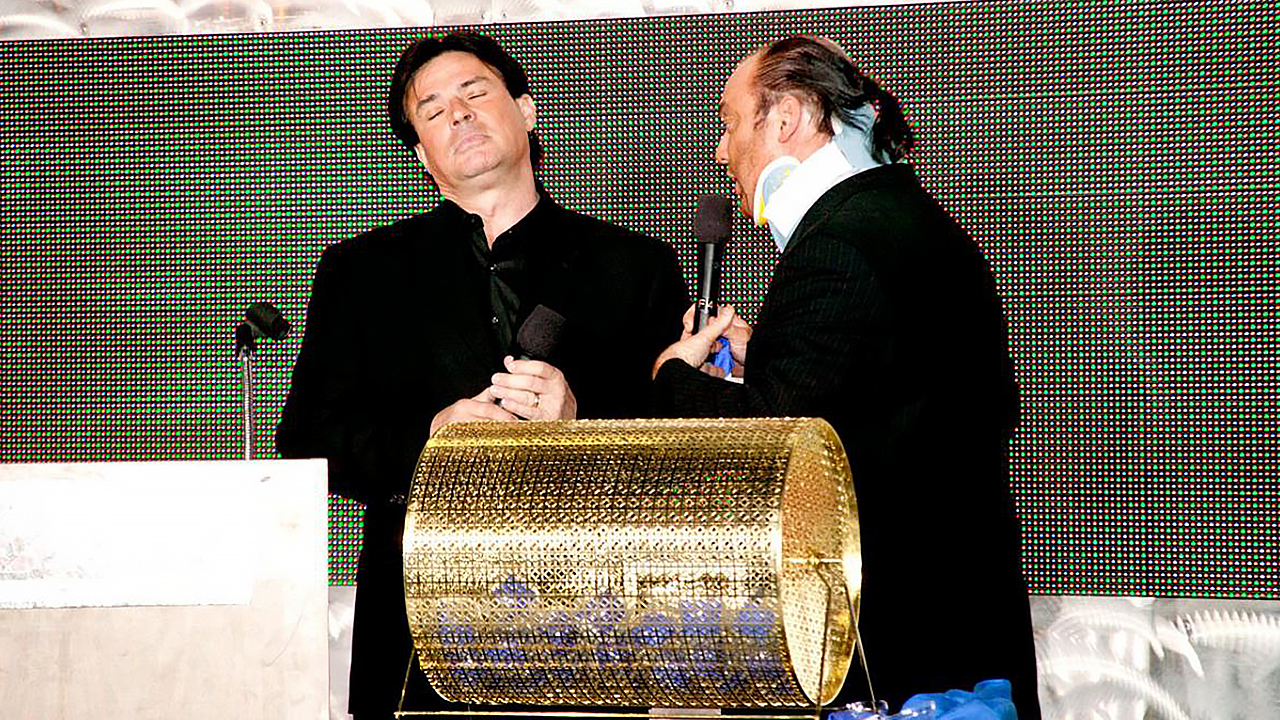 After the recent WWE Draft that just recently passed, I have to just come out and say it upfront. The 2019 WWE Draft may have been one of the worst in history when it comes to memorable moments made. When we look back in ten years, will we really remember this year’s draft? I honestly don’t think we will, however, maybe-just-maybe there is hope that somebody will remember the time when Humberto Carrillo’s cute dimples were taken to Monday Night Raw.

While this year’s draft may have been lackluster, that certainly does not mean all of the drafts in history were. WWE Drafts will always hold a special place in my heart, as they were started at the height of my childhood fandom back in 2002. In fact, some of my favorite moments in the history of professional wrestling come from this exact type of event!

So without further ado, I recommend grabbing your nearest red or blue shirt (or black shirt if you prefer the land of extreme as your home) and throw it on, because it’s time to get down to some good ol’ fashioned draft talk!

It’s the year 2006, and the land of extreme is returning. With Extreme Championship Wrestling coming back and soon to debut on the Syfy Network, they needed to build a roster and to do that Paul Heyman was given two draft picks. One coming from Smackdown, which would lead to that pick being “The Olympic Machine” Kurt Angle.

The other draft pick to ECW, however, was a pick that was a lot more faithful to the three letters of the brand. Rob Van Dam was drafted from Monday Night Raw and moved over to Extreme Championship Wrestling. That’s not the only reason why this was memorable though. The timing is what made this memorable.

Rob was in the midst of a WWE Championship program with John Cena, where RVD cashed in his Money in the Bank contract for a championship match against the Boston native. It wasn’t at just any time or any place, however, it was a strategic cash in. Rob Van Dam wanted the home-field advantage and declared that he’d face John Cena at ECW One Night Stand, the pay-per-view airing just two days before ECW returned to television.

After a successful cash-in, Rob would join the ECW brand two nights later and declare himself the new ECW World Heavyweight Champion. Truly this is one of the most memorable draft moments in the history of my childhood.

Long before there was a beast incarnate, there was the next big thing. When the former NCAA Champion made a splash in the WWF, Brock Lesnar took the world by storm. He brutalized anyone that came in his way, and all while a cocky Paul Heyman ran down everyone on the mic for the Next Big Thing.

It was no real surprise that Brock Lesnar was going to be drafted in the inaugural 2002 draft, however, the way it was done is what was memorable to me. Vince McMahon, the owner of Smackdown, tried to cheat the system and draft the young monster. However, it was Ric Flair, the owner of Raw who reminded Vince McMahon that it wasn’t his pick.

With order restored, The Nature Boy Ric Flair was able to secure “The Next Big Thing” Brock Lesnar and the rest is history. Brock would go on to later that year defeat The Rock for the WWE Undisputed Championship at Summerslam, a true breakout year for the athlete.

I was very sad in 2003 when at the time my favorite superstar in all of the WWE was injured and had to go away for a while. Over a year to be exact that I couldn’t watch Edge on my television screen, and it was due to a neck injury. One of my favorite matches in 2002 was the cause of the injury, but some small good did come from the overly negative situation.

Fast forward to the 2004 draft, we’re over a year since we’ve last seen Edge on our television screens. Eric Bischoff is up at-bat for his next draft pick, and he is rolling that tumbler around ready to reach inside to grab his next draft pick.

That’s when it happened. A young Dalton jumped to his feet and screamed at the television with excitement. Edge was back, and he was going to Monday Night Raw! The current show that had my two other favorite wrestlers, Chris Jericho and Randy Orton. I was stoked then, and I’m still stoked now just thinking back to that faithful night of Monday Night Raw.

Batista is drafted to Smackdown – 2005

Coming off the tails of one of my personal favorite moments in draft history, I have one of my least favorites as a kid. To set the stage, it’s 2005, and early in the draft a few weeks prior Smackdown’s WWE Champion, John Cena, was drafted to Monday Night Raw! What this meant for Raw was that there were now two World Championships on the brand! What this meant for Smackdown, on the other hand, was that a new championship was needed to be created.

A younger me was pumped, I was thinking about it all episode on that Smackdown at what the new championship design was going to look like. It wasn’t often that the championships changed designs back then, so I was juiced to see what was going to happen. Fast forward to the end of the night, John Bradshaw Layfield has just won the match with other superstars from Smackdown. He’s the new champion, or so he thinks.

Teddy Long comes down to the ring and informs JBL that there will be no need for a new championship to be created, as this man has just joined Smackdown. Batista’s awesome theme song hit, and out comes the World Heavyweight Champion. In the heat of the moment, I was furious. I wanted a new championship design! This actually led little kid me to hate Batista! Can you believe that? All over a new championship design, and now I can only wonder how kids these days felt about the Universal Championship reveal.

Paul Heyman is drafted to Smackdown – 2004

There’s a lot of moments I can vividly remember where I was sitting and what I was doing from my childhood. As I’ve already mentioned, the 2004 Draft is exactly one of those nights. I remember playing with my WWE action figures in front of the television, curious who was going to be drafted next!

With my Edge action figure in one hand, and my Chris Jericho action figure in the other hand. I dropped them both to the floor as I heard Eric Bischoff proclaim that the Smackdown General Manager, Paul Heyman, had been drafted to Monday Night Raw.

“Can he do that?!”, I remember yelling at the television vividly with a state of confusion set on my mind. Yes, little Dalton, he can and did do that. The Smackdown General Manager was drafted to Monday Night Raw for all of ten seconds. Why only ten seconds you may be asking yourself right now?

Simple, Paul Heyman quit the brand right then and there, leaving us without a general manager for Smackdown! More importantly to my kid brain, it left Raw without a draft pick! That just absolutely sucked, however, the shock factor will always make it remain as one of my most favorite draft picks.

Can you tell which draft is my favorite of all time yet? Once again, the year of 2004 is mentioned because once again, there was an absolute bonkers moment that shook the foundation of my childhood. It requires a small bit of backstory as well because as a kid growing up in the ruthless aggression era, I despised Triple H. I couldn’t stand to watch any of his Monday Night Raw segments.

The weird complex of that, however, is that I was such a big Evolution fan for anything not centered around Triple H. The Legend Killer was by far my favorite thing going at the time, and Randy Orton was probably my favorite wrestler at this point. That love all grew from the fact that I couldn’t stand Triple H at all.
So when Smackdown’s General Manager, Paul Heyman, announced that Triple H was being drafted to Smackdown I was so excited. I remember jumping in the air and thinking that it was finally time for Randy Orton to take center stage in Evolution! It was The Legend Killers time to go to the absolute top of Monday Night Raw!

For a few days, I was the happiest kid on earth until Triple H was traded by to Monday Night Raw for The Dudley Boyz and Booker T. That was such a big bummer, but the moment of Triple H being drafted to Smackdown? Absolutely one of my favorite moments of all time in the draft, but not exactly my number one.

I don’t think there will ever be a shock factor announcement like this was again in a WWE Draft. The WWE Champion, John Cena, was the first draft pick to Monday Night Raw and I could not believe it at the time. I was stunned. How could the WWE Champion be on RAW? What would that mean for Smackdown?

So many questions swirled my mind when John Cena arrived to Monday NIght Raw during the Highlight Reel with Chris Jericho. The electric pop that rang through the arena is still one that I remember to this day. Say what you will about the man, but at this timeframe, John Cena was the most over person in the WWE.

The shocking revelation that the WWE Champion was switching shows led to an excitement. Energy flowed through the rest of the draft that anything could happen. Would the Intercontinental Champion go to Smackdown? What about the United States Champion going to Raw? What if the Cruiserweight Champion found their way onto Raw as well?