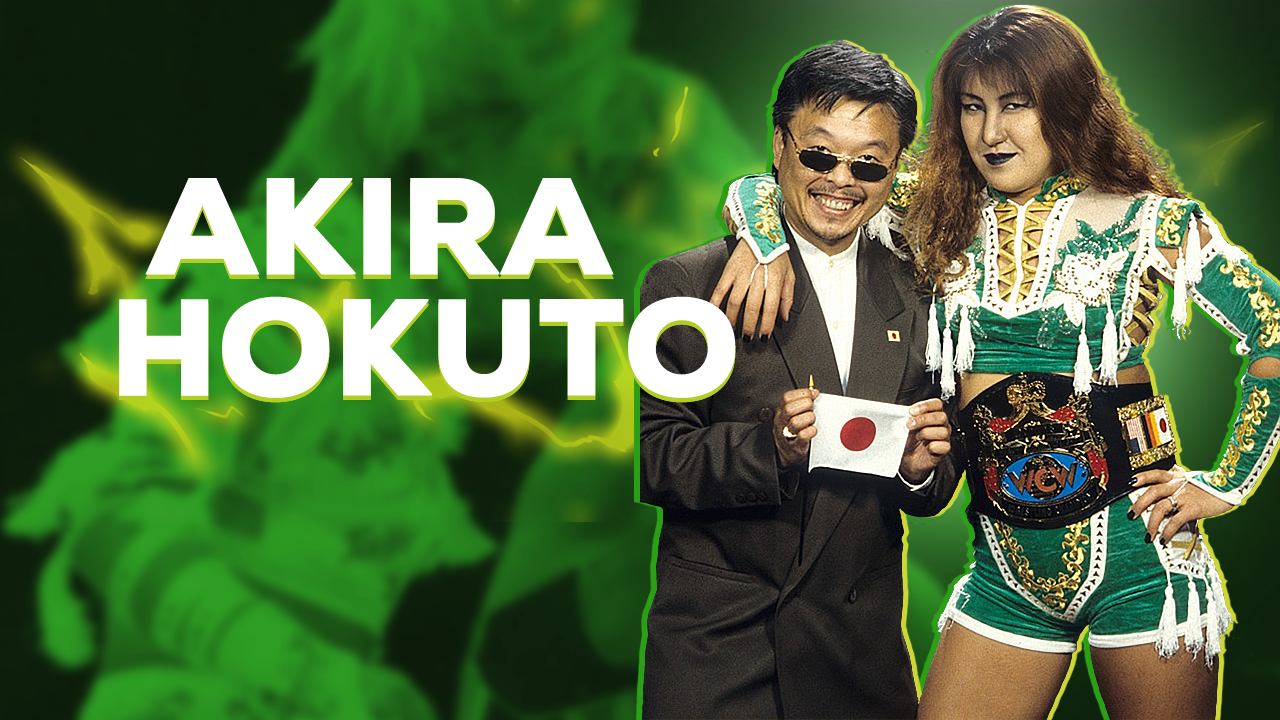 Akira Hokuto is one of the most famous professional wrestlers of all time. Whether you’ve seen a match of hers before or not, you have more than likely consumed something Hokuto accomplished over her career in one way or another – a gif, a picture, a quote, a shirt, another wrestler’s praises. Her matches have stood the test of time. Not just one or two of them, but most of them. Shinobu Kandori, Aja Kong, Bull Nakano, Mayumi Ozaki, Meiko Satomura, you name it, the match is still great if you watch it for the first time today.

Well guess what! Akira Hokuto wasn’t only an incredibly talented wrestler; She also has some of the best ring attires of all time! Ring attires matter a ton in wrestling. Everyone has their favorite attire from a special moment in wrestling history. Whether it’s a statement being made like Steve Austin & his black trunks, or Rob Van Dam with his airbrushed singlets, or Bull Nakano with her Megadeth shirts – it’s all about how the fans perceive you!

I believe this is actually the first time that Akira Hokuto & Mayumi Ozaki ever faced & it was JWP territory so Ozaki had the home field advantage here. Hokuto didn’t show up without confidence though as she sported a black, yellow, & white version of her usual 2-piece attire. This outfit is similar to Hokuto’s Dream Slam 1 attire, but with a little more daylight feel to it. It’s almost a juxtaposition in itself seeing Akira Hokuto wear an attire this loud as her demeanor was always one that fit a more classical colorway. Regardless, Hokuto looked fantastic as usual in this bumble-bee inspired gear & went on to have a great match with Mayumi Ozaki to boot.

This green attire is one of Akira Hokuto’s most famous attires; I think it’s mostly popular because it is one of the few high resolution images of Akira Hokuto that is floating around the internet from an old-school WCW magazine. Regardless of why it’s popular, the green attire hits home for me similar to the way Hokuto’s attire from Big Egg Wrestling Universe does – it reminds me of the Green Ranger from Mighty Morphin Power Rangers. The rope tassels on Hokuto’s 2 piece combined with the old grainy WCW footage of this attire also give it a sort of old-school Texas vibe that resonates with the Terry Funkness that lives on in my heart forever. Combine Terry Funk & the Green Ranger and you can see why this is one of my favorite Akira Hokuto attires of all time. It also doesn’t hurt that she was facing off against Kaoru on this episode of WCW Worldwide.

Akira Hokuto’s career was starting to wind down in 2001. She had finished up with WCW quite a few years prior & dedicated more time to Chigusa Nagayo’s promotion, GAEA Japan – yes, the same GAEA that had a working partnership with WCW! As Hokuto was a certified legend at this point, that means her attire game followed suit. In her match with Meiko Satomura, current founder of the promotion Sendai Girls & also now certified joshi puro legend, Hokuto brought out the Captain Marvel attire. No, it wasn’t actually inspired by Captain Marvel, but probably more-so Captain Marvel was inspired by Akira Hokuto. This red & blue attire was complimented by the classic Hokuto tassels, an incredibly kick-ass butt cape, & an arrange of golden buttons all along the sleeves. In contrast to previous Hokuto attires, this was definitely one of her loudest yet confident attires.

While Akira Hokuto didn’t have what many consider to be a long run in WCW, she did get to break out a lot of different outfits from her closet. This particular black & silver sequin outfit was entirely different from the 2-piece that Hokuto usually would don over her career. Her shoulders were covered up more than usual with faux shoulder pads, her usual long tassels attached to the sleeves were now small top-tied ropes, & she had a cut up mini-cape of sorts attached to the bottom-back of her top which would flow in the wind as she railroaded Malia Hosaka on this random episode of WCW Monday Nitro. While I do prefer the usual Hokuto 2-piece, sometimes something new is exactly what the mizarks ordered.

This specific ring attire is incredibly special. The attire won at GAEA Limit Break 2002 was the official Akira Hokuto retirement attire. Now while Hokuto did return for a few matches over the next few years, this is still considered her “final match.” Hokuto’s outfit in this match was almost a love letter to her career. It was still the classic 2-piece attire that we all came to know & love, but it featured bits from various outfits in this list. The flowing fabric from the Big Egg Wrestling Universe main event, the silver sequin & top cape from her WCW Monday Nitro appearances, the classic Hokuto sleeve design, the one shoulder pad on her right shoulder, and finally the tassels on the bottom part of the sleeve putting together the end game Akira Hokuto ring attire. Truly a fitting last attire for the Dangerous Queen & one of the greatest professional wrestlers of all time.

Akira Hokuto changed her attire for every single round of the VTOP tournament at Big Egg Wrestling Universe starting off with this pink, white, & gold attire against Combat Toyoda in round 1. Hokuto loved adding a little gold flair to all her attires & to no surprise, it always complimented her attires. I think mostly it worked because it matched her vintage gold/blond hair. Hokuto didn’t use pink often, but when she did, she worked it. She also wore pink, albeit a lot more pink, on WCW Monday Nitro when she teamed with Bull Nakano against Cuty Suzuki & Mayumi Ozaki – that sentence is very weird, but it happened!

Classic Akira Hokuto 2-piece outfit with a fantastic primary color that makes her stand out against everyone. Similar to her outfit at AJW Destiny, Hokuto tuned the orange up to a beautiful solid red for her AJW All Pacific Championship match against Rumi Kazama. The sleeves touted the classic full tassel design that Hokuto became so known for while using the sleeve design similar to her AJW Dream Slam 1 black & white attire. While most of her outfits seemed similar, there were always subtle changes to the design such as the chest foliage design being different here compared to previous renditions of this outfit. In & out of the ring, Akira Hokuto was always looking to change the game.

Akira Hokuto paid homage to her favorite pro wrestling brand, DEADLOCK, against Manami Toyota with this special orange & white attire. Okay, maybe not, but this attire kicks ass & it definitely kicks more ass because it reminds me of DEADLOCK. Hokuto went extra hard with the tassels on this one – tassel queen, queen of tassels. Manami Toyota is most known for her finish the Queen’s Landi- I can’t even say that with a straight face. Toyota is most known for the Japanese Ocean Cyclone Suplex, but she was the real deal from bell to bell & this match was no different. You’ll definitely start noticing a trend on this list as Akira Hokuto really just doesn’t have bad matches… ever.

Yeah, WCW actually had a women’s division for a bit! Akira Hokuto, Bull Nakano, Cuty Suzuki, even Mayumi Ozaki were all on WCW television. Eric Bischoff even worked out a deal with the legendary GAEA Japan promotion at one point. Sadly, the division was extremely short sighted & basically just a way for Bischoff to use Medusa on TV since they spent a lot of money getting her to come to WCW from WWE. At the very least, we got to see Akira Hokuto perform on a pretty regular basis in the ‘States & she brought some of the best attires in the wrestling business with her including this blue, white, & gold attire she wore against Debbie Combs. Fun fact, she actually wore this same attire at Big Egg Wrestling Universe against Eagle Sawai.

Big Egg Wrestling Universe was sorta wild. Yes, the name of this event is incredibly weird, but when you look back on this event it definitely will always go down as one of the most ambitious wrestling shows of all time. 42,500 people in the Tokyo Dome watched as Akira Hokuto & Aja Kong faced off in the main event in the VTOP women’s tournament final. Akira Hokuto looked like an absolute dream in this match; it was almost as if Hokuto had been hand drawn by an artist. Still dawning the classic Hokuto 2-piece, she switched it up by adding more flowing fabric to the sleeves & to the bottom piece of this gold & white outfit instead of the tassels she is usually known for. This outfit was very Cuty Suzuki-esque in it’s presentation while also reminding me of the White Ranger from Mighty Morphin Power Rangers – it hits all the right angles for me.

The good ol’ black & white attire; a little gold trim here & there – it’s legendary. Not only is this one of Hokuto’s best attires of all time, it’s mostly remembered because of her match with Shinobu Kandori at AJW Dream Slam 1 where both women just beat the ever loving dogshit out of each other for half a hour. Hokuto was a bloody mess the entire night & maybe that’s why this attire is so legendary to me because every time I think of it, I think of this match. When I think of Akira Hokuto, this is the ring attire that I see her in.