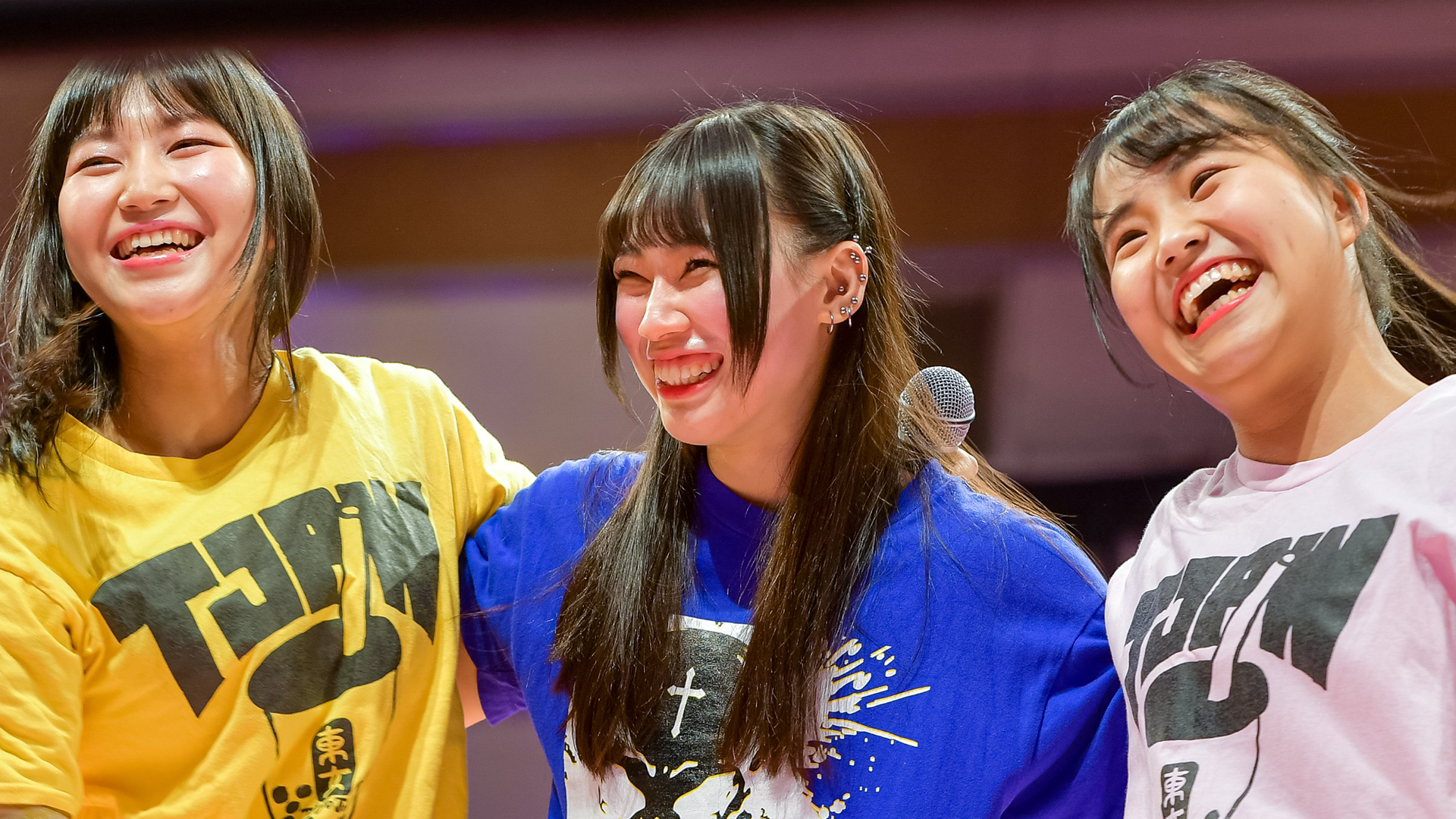 Tokyo Joshi Pro Wrestling has been introduced to a lot of new eyes this year, especially outside of Japan. This summer, Shoko Nakajima and Yuka Sakazaki performed for All Elite Wrestling and fans instantly fell in love with both TJPW wrestlers, especially Sakazaki and her “sad wrestling face.” Tokyo Joshi Pro will probably gain more new fans in April 2020, when not just a few wrestlers will travel to the U.S. for WrestleMania weekend, but the promotion will have its first full show outside of Japan as part of WrestleCon.

For those who have seen a few TJPW matches or wrestlers (Miyu Yamashita and Maki Itoh have also gotten more exposure) and don’t know where to start watching or what to expect, here’s an introduction to the promotion – it’s history, style, and some of its best matches.

Tokyo Joshi Pro was founded in 2012 as the all-women sister promotion of Dramatic Dream Team (DDT Pro). Apart from one experienced wrestler, NEO Ladies’ Nozomi Dai, the initial roster was made up of three trainees: Kanna Shinmei (KANNA), Chikaga Kiba, and Miyu Yamashita. Dai resigned later in the year, making the other three women effectively the TJPW OGs. The roster steadily grew, mostly made up of homegrown recruits (Shoko Nakajima and Yuka Sakazaki were the next two additions as trainees) who were also idols or models.

When the company began to have events in January 2013, the shows featured musical performances from local idols along with wrestling matces because TJPW had so few wrestlers, but by December 2015, Tokyo Joshi Pro was large enough to hold its first all-wrestling event. In January 2016, it began a yearly tradition and crowned its first champion when Miyu Yamashita became the first person to win the Tokyo Princess of Princess Championship at the first annual TJPW January 4 Korakuen Hall show.

TJPW currently has three active championships and one annual tournament. The tournament, the Tokyo Princess Cup, has taken place every year since 2014. The top title was first won in 2016, as previously established, and the first Tokyo Princess Tag Team Champions were crowned in October 2017.

In July of this year, both these titles had the word “Tokyo” stricken from the beginning of their names as part of TJPW and DDT’s effort to grow their international audience. The company also introduced a new title at that time – the International Princess Championship. It was crowned in a tournament featuring Japanese and international talent, but so far has only been won by Japanese wrestlers and defended in Japan, so in practice, this is a basically regular mid-card title so far.

Tokyo Joshi Pro can be referred to as part of the “idol wrestling” genre, like World Wonder Ring Stardom, with its own distinct, DDT Universe take on the style. The influence of DDT can be seen in its more comedic characters and matches, though TJPW has more serious matches and straightforward characters too.

While there are some really skilled wrestlers (at the in-ring part of wrestling) in Tokyo Joshi Pro, it’s a promotion known more for the personalities and characters of wrestlers than for hard-hitting action. Just a few wrestlers in its history have had significant athletic backgrounds (Yamashita with karate, Yuu with judo), while most talent is recruited from idol groups and modeling agencies. Though there are impressive athletes in TJPW, the promotion is more about connecting with the characters than marveling at feats of strength or high-flying maneuvers.

If the way TJPW does wrestling is something you enjoy, those connections – whether it’s because a character makes you laugh, gets you to develop a crush on her, gets you invested in her character journey, or some combination of the three – usually pay off.

The three most veteran TJPW performers (in terms of working for the company) have been the most major players in the Princess of Princess Championship picture over the past year or so.

Yuka Sakazaki is the current champ in her second reign. She’s one of Tokyo Joshi Pro’s best and most likeable wrestlers and one of its most decorated – along with ther two top title reigns, she’s one of two women to be a two-time Princess of Princess Tag Team Champion. She’s also a Magical Girl, and what her character lacks in actual magic powers she makes up for with manic energy.

Shoko Nakajima, TJPW’s “Big Kaiju”, stands at just under five feet tall. Nakajima is very strong, technically sound, and easy to root for. She won the Princess of Princess Championship for this first time earlier this year, then lost it to Sakazaki, her former partner (they were the first tag champs together) turned rival. Definitely check out their matches with or against each other for some of the best of TJPW.

Sakazaki’s challenger at the upcoming January 4 show is Miyu Yamashita, the company’s ace. Yamashita is TJPW’s hardest striker and one of its most serious characters, in a way that makes her matches feel like a big deal. She’s the only other multi-time Princess of Princess Champion besides Sakazaki, and her second reign is the longest in the title’s history at 484 days.

Meanwhile, the Princess of Princess Tag Team Championship picture has been home to a story of fashion goths, plucky babyfaces, and brainwashing. Miu Watanabe and Rika Tatsumi are currently the reigning champs as of DDT Ultimate Party 2019. Watanabe debuted in 2018 as part of the Up Up Girls, a group of new TJPW wrestlers with an idol gimmick who performed a wrestling-themed song and dance routine to open every show, and has evolved into the sporty one of the group. Tatsumi is the White Dragon, with a last name inspired by the legendary Tatsumi Fujinami. She debuted in 2014 and has a long history with Misao, half of the team from which she and Watanabe one the titles, who she’s currently trying to save from the influence of French aristocrat Sakisama.

Sakisama and Misao, the previous Princess Tag Team Champions, are NEO Biishiki-gun, the second team of that name to hold the tag titles. Sakisama is probably better known as Saki Akai, a wrestler, actress, and model signed with DDT who has also wrestled in Stardom, Oz Academy, and elsewhere. Her Sakisama character is specific to TJPW, a high-class woman who makes younger wrestlers fall under her spell and become her goth-ed up minions.

Her latest conquest, Misao, used to be Hyper Misao, a comedy superhero character, before she cut up her mask and dropped the jokes for a life of beauty and fashion. As Hyper Misao, her match with deathmatch icon Jun Kasai, her idol, is one of the best and most emotionally moving in TJPW’s history.

Outside of the major title scenes, TJPW also includes:

Maki Itoh, the current International Princess Champion, a charismatic and rage-filled former idol character, who you can read more about on Deadlock here.

The Bakuretsu Sisters, the tag team of real-life sisters Nodoka Tenma and Yuki Aino, who are very strong and hard to knock over, especially Tenma, the more experienced one.

Yuna Manase, Yuki Kamifuku, and Mina Shirakawa, known as Cat’s Pye, three wrestlers who also work as gravure models and debuted for Tokyo Joshi Pro in that order – Kamifuku and Shirakawa as TJPW originals and Manase coming over from Stardom. They all do some comedy offense based on them being hot and sometimes work as a team both for TJPW and on some DDT shows. Manase’s also kind of a hoss.

Mizuki, a freelancer, is a prominent member of the TJPW roster and one of its best wrestlers. She’s been a tag team champion, used to be Itoh’s partner in the Itoh Respect Army before its heartbreaking break-up earlier this year, and is currently one-fifth of DDT’s KO-D Ten Man Tag Team Champions. She’s also an adorable bunny.

This isn’t even close to a breakdown of the entire TJPW roster, which also includes a fashion clown, a goth cat girl, and a literal middle school student, but hopefully it gives you an idea of who some of the major wrestlers are, what type of characters they have, and what kind of storylines you can find in TJPW.

As for foreign wrestlers and guest stars from other companies, TJPW doesn’t feature as many of them as some other companies, but there has been some cool outside talent on Tokyo Joshi Pro cards. From outside of Japan, the likes of Thunder Rosa, Su Yung, Veda Scott, and Gisele Shaw have performed on the pink mat, as well as Meiko Satomura, Aja Kong, and the previously-mentioned Jun Kasai from other Japanese promotions.

Like DDT, TJPW matches sometimes have stipulations, jokes, or plot points that can be difficult to understand for viewers who don’t speak Japanese because they’re performed or explained through promos in Japanese. The company doesn’t put subtitles on promos or have an English commentary team, but there are other ways English-speaking viewers can keep up with this stuff.

The Dramatic DDT fan blog publishes show recaps, results, and other DDT updates and history. The DDT English Update Twitter account provides more thorough “unofficial but authorized English translations” during most DDT and TJPW shows, as well as translations of backstage promos and announcements. A fair amount of TJPW matches can be easily understood by people who don’t speak Japanese, but it’s still a good idea to keep the @ddtpro_eng live translation thread open if you’re watching a Tokyo Joshi Pro show.

You can watch Tokyo Joshi Pro shows and matches on the DDT Universe streaming service, which costs 900 yen a month. Like all good streaming services, you have the option to try it out with a free trial month, but you can also check out some TJPW matches without signing up for anything. Some TJPW matches get uploaded to the official DDT YouTube channel for free and checking out those matches is an easy way to see some of what the promotion has to offer. A few of those matches are embedded earlier in this article, and some other good ones from this year are: