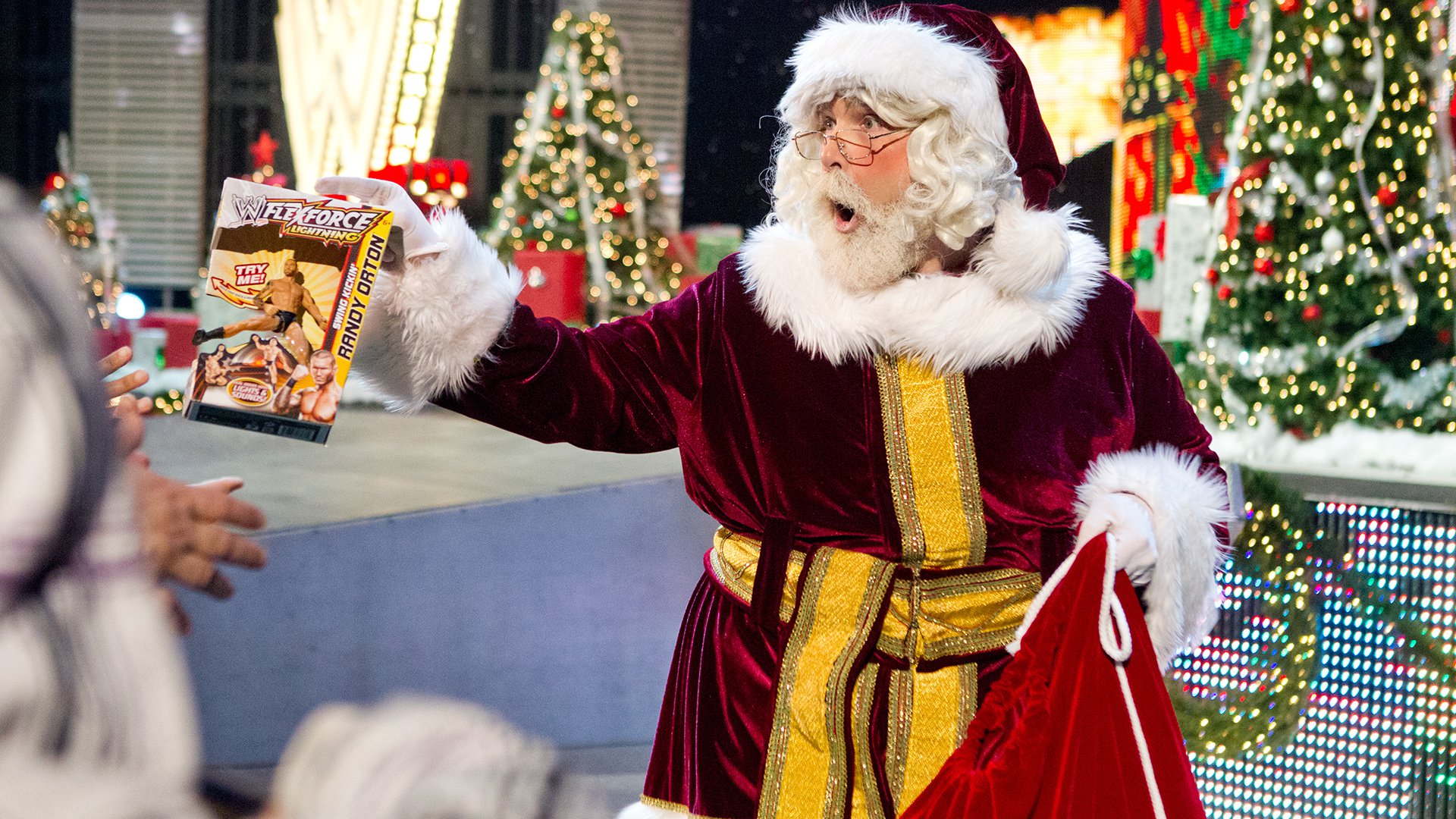 Who comes around one month out of the year dressed in all red and white with a big bag of presents? Mick Foley! Wait. That’s not right. Santa Claus! Santa Claus does all of these things, but you know what else Santa Claus does? Santa Claus drops people on that stack of dimes they call a neck! A Santa Claus Stunner connects and BAM! Christmas is saved.

I might be mixing up professional wrestling with the Christmas tales of Santa Claus again. However, over the course of professional wrestling history, I’m not the only one. It seems that in the month of December, we always get a surprise – Santa Claus. Usually, it’s a superstar that’s typically popular with the crowd. Sometimes though, you get some superstars dawning the red and white for a comedy spot. No matter what though, there’s always one constant when Santa Claus comes to the squared circle. The naughty list is sure to be made by at least one superstar involved with that segment. Who is the best wrestling Santa Claus though? With so many superstars getting involved with the jolly ol’ man, there has to be the best wrestling Santa, right? It’s time to find out, so get your milk and cookies it’s time to get the reindeer ready… Santa Claus is coming to town!

It was the night before Christmas in 2001… Monday Night Raw had dual Christmas parties, hosted by Ric Flair and Vince McMahon. With Bubba Ray Dudley dawning the red and white for one Christmas party while Tajiri dawned the Santa Claus outfit for the other. What made this so memorable to a lot of people was Stone Cold Steve Austin’s segment with “Tajiri Claus.” The Texas Rattlesnake sat on Santa’s lap and proceeded to read his Christmas list.

From a case of beers, to a fifth of crown royal, another shot at Booker T, some more beer, a shot at the Undisputed Championship, and to a brand new pickup truck, Stone Cold Steve Austin had it all listed for Santa Claus! Don’t forget about Torrie Wilson’s presence as Santa’s Little Helper either. At the time on screen, Tajiri and Torrie Wilson were dating.

All in all, the night would end with Bubba Claus going one on one with Tajiri Claus, a match that pitted one half of the World Tag Team Champions against the Cruiserweight Champion. Tajiri Claus, with the assist of Tazz, would end up using a special red mist on Bubba Ray Dudley leading to Tajiri’s win – Christmas was saved!

Rumor has it, Stone Cold never got that fifth of crown royal.

Mark Henry has gotten into the holiday spirits a few times in his career now. Regardless if it’s from his WWE ECW days with Tony Atlas or this time with Damien Sandow, Mark always was great at delivering that Christmas cheer. “The Battle for Christmas” took place on December 23rd, 2013 – Damien Sandow, who was known during the match as “Bad Santa”, tried to take down “Good Santa”, which in this case was Mark Henry.

Everything was legal in the Battle for Christmas including “candy canes” – candy kendo sticks as the commentary team continued to say. Presents and Christmas trees were used all over the place, and with such a high stake as “If the Bad Santa wins, Christmas is canceled!” As Michael Cole said on commentary that night, “The World’s Strongest Slam becomes the Sleigh Ride tonight!”, as Mark Henry defeated Damien Sandow to win the match. These Santa vs. Santa matches are usually fun, a nice break from the norm that we tend to get on our weekly programming and this was no different.

The Attitude Era is a time-frame in wrestling that I’ve talked a lot about before. One of my favorite segments in the Attitude Era actually came from some involvement of Santa Claus! It was December 20th, 1999… Mankind was set to have a Boiler Room Brawl match right before the new millennium began. Who was Mankind going to face in the Boiler Room Brawl match on Monday Night Raw? Was it going to be The Rock? Stone Cold? The Undertaker? No, no, and no.

Mankind would enter the Boiler Room Brawl, ready to face off against Santa Claus. When Mankind and Santa came face to face, Mankind told Santa he didn’t want to end up on the naughty list. So in good faith, Mankind said he’d turn his back and just let Santa Claus walk right on out of there and win the match. “I’ll put you over, Santa!”, were Mankind’s exact words.

What Mankind didn’t expect, however, was for a whole gang of Santa Claus to attack him; It wasn’t a gang of reindeer, it was D-Generation X! All dressed up as Santa Claus, DX put the boots to Mankind. After a final shot to the face with Santa’s sack through a glass picture frame, it was Santa (one of them anyway) who walked out of the Boiler Room to win the match. That Santa, of course, being the dastardly Triple H.

Imagine trying to turn one of the hottest babyfaces of the decade heel. How do you make sure that the babyface gets that good ol’ fashioned heat? Well, simple really, you just line up their heel turn a month before Christmas and then have them attack Santa Claus!

Daniel Bryan was already getting heat, but how do we turn it up a notch? How about show up on the Christmas episode of SmackDown Live with one thing in mind – beat up Santa Claus. That night it just so happened to be R-Truth, who can virtually do no wrong and is excellent at many tricks of the trade. Daniel Bryan proclaimed how much he hated that he had to be in the arena that night, rather than being at home with his family. On top of that, he called R-Truth a joke. Truthy Claus kept his cool though and even went to start a seven-second dance break! That was of course until Daniel Bryan attacked him from behind.

When you think about Tribute To The Troops most usually think about one superstar – John Cena. He’s been a staple of the event since it’s inception and during the 2007 version of the event, Cena made a special moment when he became Santa for a night. Who better to be Santa’s Grinch than… Vince McMahon?!

What made the moment even better than seeing John Cena dressed up as Santa Claus was that Cena was also hurt at the time; Accompanying the red and white suit and big white beard was also an arm sling. With only one arm at his disposal, John Cena made the most of the moment dropping Vince McMahon with an Attitude Adjustment.

Similar to the last entry on this list, this moment also took place at the Tribute To The Troops. It was actually the very first tribute to the troops styled show taking place back in 2003. The title of the show was “Christmas From Baghdad” and Vince McMahon opened the event. Vince waltzing down to the ring doing his strut in only a way that he could; In retrospect, it’s a very similar moment to what happened in 2007 at the Tribute To The Troops show.

Mr. McMahon was always the Grinch around this time of year if he was on camera. However, during his opening few sentences, he always put over the troops. It was something he did time and time again, but of course, that was until he was cut off with Christmas music; Santa Claus came down to the ring much to Mr. McMahon’s hatred. After being interrupted, Vince took things into his own hands and actually attacked Santa from behind.

That’s when the reveal happened – Santa’s hat and beard came off and up rose the Texas Rattlesnake. Stone Cold Steve Austin and Vince McMahon were each others greatest rivals during the Attitude Era and for that feud to continue for this special segment at Christmas From Baghdad, that earns the spot on this list. Plus, how can a Stone Cold Stunner in a Santa outfit not be awesome? I highly recommend everyone seeking this segment out, it’s a quick segment but a great re-watch.

You can’t have a wrestling santa list and not have Mick Foley as number one – It just can’t happen. If there’s a rule-book for writing wrestling, I’m sure this rule falls in-between numbers twenty-five and seventy-four. This entry on the list is special because there isn’t just one moment to list; Mick Foley has had several moments dressed up as old Saint Mick.

Not only has Mick Foley graced the WWE audience as Santa Claus, but he’s also been in a movie all about the life of Santa Claus and the people who portray Santa every year. Mick Foley once wore nothing but Christmas themed shirts for an entire year straight – talk about dedication to the craft. Mick Foley was known in professional wrestling for having the three faces of foley, but I’m almost confident that we should all add the fourth face to that – Saint Mick. For every time that Mick Foley has graced the red and white outfit, I know I personally have enjoyed every single second of that segment. It’s just something about Mick Foley, the kindness in his heart mixed with the themes of Christmas.

No matter who is wearing the Santa Claus outfit in pro wrestling though, it’s truly one of the more magical things about professional wrestling during the month of December.