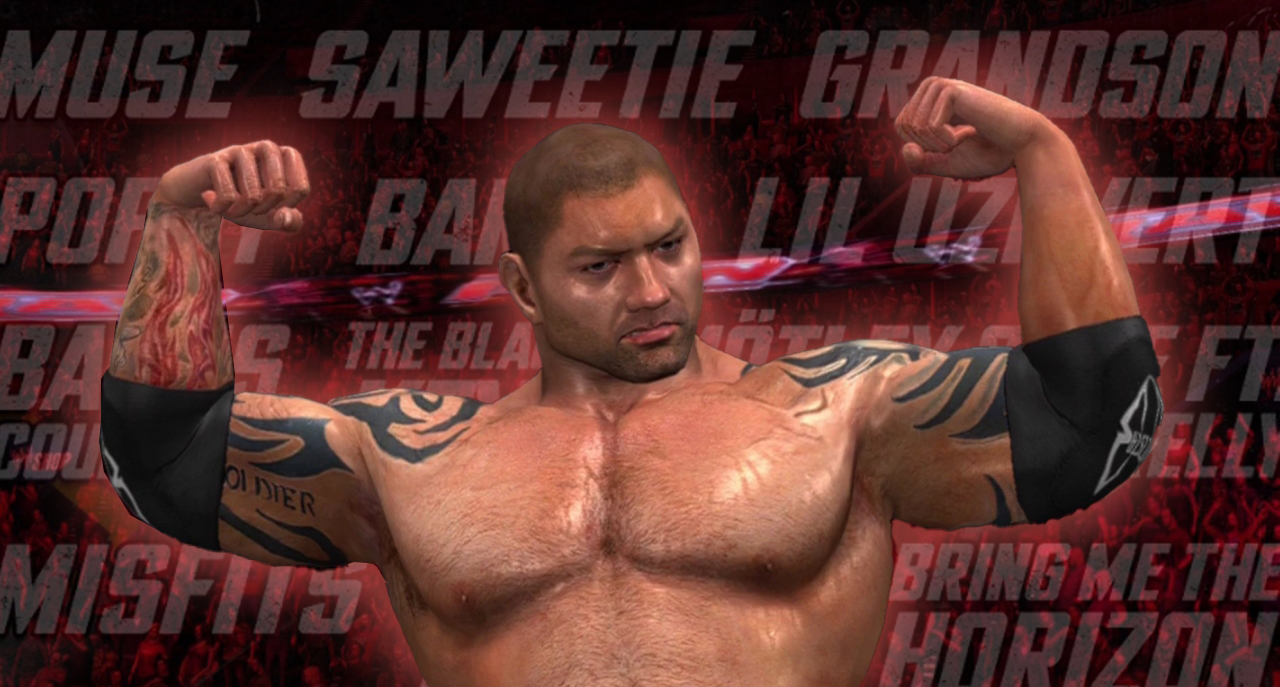 One of the most underrated things about a video game is the soundtrack. A great soundtrack can set the entire tempo for a game from the moment you load onto the menu screen; The Tony Hawk Pro Skater franchise is a perfect example of this. The same can be said about WWE games, just fewer kickflips, and more powerbombs.

A great wrestling game soundtrack can raise your mood, after all, you’re going to listen to this soundtrack for an entire game cycle which usually is an entire year. The most recent installment of the WWE Games has been a big case of trying to cater to too many demographics for the soundtrack, which in turn clusters the soundtrack up and leaves you with no sense of direction. The older WWE Games all featured a general kick-ass feeling to the soundtrack, with a good diversity of rap and rock featured throughout, and you knew when you popped the disc in for the first time you were going to be in for a treat.

WWE 2K16 is the only WWE 2K released game that will be making the cut for this top seven list. I have given every WWE 2K game a fair listen, but outside of 2K16 I just couldn’t get into any of them. WWE 2K16 had a decent mix of songs from several genres. At the time of release, it was one of the only WWE 2K games that I actually didn’t just mute the licensed soundtrack. From “Soul Man” by the Blues Brothers to “It’s Tricky” by Run-DMC, this soundtrack had something for every music genre fan while still having one central theme at the same time. A quality that none of the following WWE 2K games, or previous WWE 2K games had.

Over ten years separate the first entry on this list from the second; SvR2005 is the very first licensed soundtrack in a WWE Game. SmackDown vs. Raw 2005 was centered around an obvious theme – brand versus brand. What better way to get that theme across than have “When Worlds Collide” by Powerman 5000 as the lead song for the game? Powerman 5000 dominates the majority of this soundtrack as well, with four songs included from the band. For being one of the first licensed soundtracks ever, it set the pace for what was to come down the line in the WWE Games franchise.

When you talk about WWE Games soundtracks, a big contender most people go-to for the best is SmackDown vs Raw 2007. With good reason as well, not only did the soundtrack feature twelve phenomenal songs, but they all served a great purpose. I’ll never forget the first time I heard “Money In The Bank” by Lil Scrappy come on, it was just as I was selecting who was going to be in my first ever Money In The Bank Ladder Match. A match that was making a series debut at the time.

This soundtrack is one that stuck with me all throughout school. The year that the game came out, I was in drama class and used “Lonely Train” by Black Stone Cherry as a charade answer. When soundtracks can work their way into your day-to-day life, I think there is no doubt in anyone’s mind that the soundtrack was great.

At the time of release, Three Days Grace was a band that was practically everywhere. If you turned on MTV during the hours when they’d play music videos, you were bound to see at least two to three from the band. It always blew my mind as a kid that two of their songs made the cut on the game, not to mention “Survive” by Rise Against.

SmackDown vs. Raw 2009 is a hugely underrated game in the WWE Games franchise. It was the first year that we got a “Road To Wrestlemania” mode, and every single one of them was memorable. Speaking of memorable, SmackDown vs. Raw 2009 is the game that introduced me to Egypt Central; “Taking You Down” and “You Make Me Sick” are two songs that to this day still get stuck in my head and are extremely difficult to get out.

The game featured ten songs this time around with the majority centered around rock music. “Save Me” by Burn Halo is still on my playlists to this day, and a big reason is because I’d play with my WWE Action Figures with SvR09 on the main menu. That’s how I enjoyed a lot of these games soundtracks, they would become the background music to my action figure federations. Quite a few of the SmackDown vs. Raw 2009 tracks were actually “pay-per-view” songs for my figure federation.

The one and only negative I think I can even think of is the smaller track count. To me, it seemed that SmackDown vs. Raw 2009 was the last game to really get a proper soundtrack in the WWE Games franchise until the WWE 2K games took over with WWE 2K15.

The video game debut of Monty Brown, the return of Jeff Hardy to the WWE Games franchise, and the last year for the much-beloved “General Manager” mode. SmackDown vs. Raw 2008 will forever be remembered as a game that had so much to offer, but small gameplay changes ruined it for some players. I’m very much in that boat, but that’s honestly why this soundtrack sticks out so much more for me as a positive.

I spent so much of my time playing the “General Manager” mode for this game, but simulating matches instead of playing because of the gameplay. Due to this, almost the majority of my time on this game was spent in the menus. If it wasn’t for “Famous” by Puddle Of Mudd or “Go Hard” by Nobody Famous, I probably would have gone insane.

The soundtracks in wrestling games usually can’t break a game, but they certainly can make a pretty bad game feel a little better. Which that point is exactly what SmackDown vs. Raw 2008’s soundtrack did for me. While I think the gameplay is one of the worst at the time, the soundtrack is the one thing that kept me coming back for more.

Day Of Reckoning’s entire soundtrack was the SmackDown vs. Raw 2005 soundtrack, but without the Powerman 5000 songs, which to me made this game’s soundtrack far superior. This may be an unpopular opinion, but I really didn’t enjoy Powerman 5000 all that much.

Anytime “Firefly” by Breaking Benjamin would play on Day Of Reckoning, I’d belt the song out to my heart’s desire. A big reason why I also prefer Day Of Reckoning’s version of the soundtrack over SmackDown vs. Raw 2005’s is that in DOR, we had no commentary. That’s right, the commentary didn’t happen, instead we were given background music during the matches featuring all of the soundtrack.

Anytime “Firefly” by Breaking Benjamin came on when I was playing DOR, that match became a squash match. It was such a great soundtrack, but with SmackDown vs. Raw 2005, you’d likely never hear it too much unless you were in the menus. With Day Of Reckoning, this soundtrack played almost endlessly when you were on the game, and as Diamond Dallas Page once said, “That’s not a bad thing, that’s a good thing.”

“Open up my eyes, saving what’s been broken.” The opening lyrics to by far my favorite song in any WWE Games soundtrack ever. “Waiting” by Not Forgotten was my favorite song for years after SmackDown vs. Raw 2006’s release, and because of that I have to put this soundtrack as number one.

Without the obvious favoritism towards “Waiting” by Not Forgotten, I honestly do think this is the best soundtrack. Every. Single. Song. Every single song just hit different on SmackDown vs. Raw 2006. All twelve tracks were some of my favorites ever featured in the franchise. Bumpy Knuckles was the only artist featured twice on this soundtrack, but even with the double song the entire soundtrack flowed so well.

The songs featured on this soundtrack had a very dark undertone to them. Of course, there were a few exceptions to this, but overall the dark soundtrack fit the theme of the game. I may be showing a bit of favoritism to SmackDown vs. Raw 2006 in general, as it is my favorite WWE Game of all time, however, the soundtrack is another reason why this game was so good.

The countless hours I spent playing the debut of “General Manager” mode were blissfully spent with twelve bangers playing one after another. No song was a bad song, and it’s honestly one of the first soundtracks I ever fell in love with as a kid. For that reason, SmackDown vs. Raw 2006 is my current and will more than likely always be my favorite WWE Games Soundtrack in the history of the franchise.